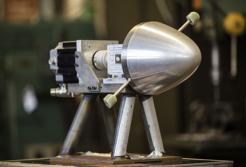 Research Centre: Aerospace
Industry: Aerospace Manufacturing, Robotics & Automation, Robotics
The NRC has developed a one-of-a-kind, in-situ rotating ice adhesion rig, where researchers are able to measure the adhesion properties of ice to various icephobic coatings in controlled and repeatable conditions. Innovators creating these ice-resistant veneers see their potential application on drones as a match made in heaven, as UAVs’ limited onboard power and payload means a passive ice-prevention method is preferable.