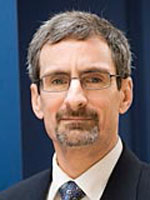 Stratford Managers is a service provider focused on helping small and mid-sized technology companies grow by tapping into the tools and experiences of Stratford's world-class team. Clients include some of the most successful and innovative companies in the world involved in technologies ranging from semiconductors to software.

Jim started his career in 1986 as a founding member of Newbridge Networks Corporation. During nine years with the company he served in engineering and then increasingly senior management roles, including Vice President & General Manager of the Semiconductor Products Division. He helped the company grow to over $1B in annual revenues.

Jim left to start Tundra Semiconductor Corporation in 1995. A developer of specialized chips for the world's leading communications companies like Cisco and Nokia, Tundra had a successful IPO in just over three years, eventually growing to over $1.5B in market value. As Tundra's President and CEO, Jim led the company through double-digit average annual revenue and profit growth, infusing the culture with his values of respect, passion, innovation, integrity, and excellence. After leading the company through many successful product introductions, company acquisitions, international expansions and major business partnerships, Jim left Tundra in 2006 to start Stratford.

Jim's first assignment at Stratford was as the interim President and CEO of CMC Microsystems. CMC uses government funds to provide the research infrastructure for designing, manufacturing and testing advanced microelectronic, MEMS, microfluidic and photonics technologies. It serves over 1500 researchers across 42 Canadian universities. In this assignment, Jim led the company through a restructuring of its operations, revamped the leadership team, established clear objectives and metrics and improved operating efficiency. He also chaired the board selection committee to successfully hire a full-time President and CEO.

Throughout his career Jim has advised numerous private and public companies, always with a focus on helping organizations clarify and achieve their goals. He is on or has been on advisory committees and boards for diverse organizations including, among others, Wi-LAN Inc., DNA Genotek, NSERC, CMC Microsystems, Precarn, DFAIT, CANARIE, Symagery Microsystems, Cirrus Computing, OCRI, Queensway Carleton Hospital, and Youth Services Bureau.