Research Centre: Ocean, Coastal and River Engineering
With the majority of the world's population living along coasts, engineers must consider the effects of waves and water levels, and sometimes ice, when designing coastal infrastructure facilities. These natural forces can cause operational and safety issues, as well as structural damage, with the potential for significant financial consequences. When Baird & Associates (Baird) approached the National Research Council (NRC) in 2004 to undertake physical modeling for a port in Fort Dauphin, Madagascar to assess these risks, the NRC team was up for the challenge. 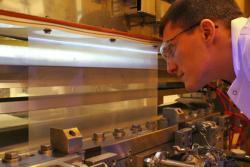 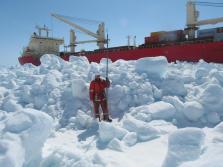 Research Centre: Ocean, Coastal and River Engineering
Pressured ice conditions arise when environmental forces cause the convergence of ice, creating dangerous build-ups. This pressured ice an have seriously adverse effects on ships causing them to be stranded in harsh climates and increasing the safety risks to the crew aboard. Until 2011, no reliable method was available to predict these dangerous regions making it extremely difficult to navigate through ice-covered waters. Depending on the severity of ice conditions, a vessel affected by pressured ice can be beset between a few hours to a couple of weeks.