Drs. Pavel Cheben and Laura Ferrarese inducted into the Royal Society of Canada 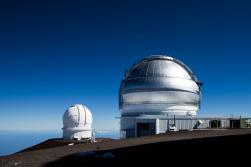 Research Centre: Herzberg Astronomy and Astrophysics
Atop Maunakea, a 4,200-metre-high dormant volcano on the Big Island of Hawaii, sit two of the worlds most impressive observatories, respectively housing the Canada-France-Hawaii and Gemini North telescopes. Each distinct in its role and purpose, these massive and highly-specialized telescopes provide some of the clearest and most detailed views of our universe.