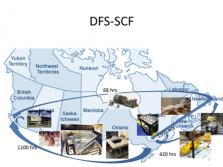 Design and fabrication services at the NRC – adding value for Canada

Research Centre: Design and Fabrication services
The hallmark of the National Research Council's (NRC)Design and Fabrication Services Branch is its ability to work with NRC researchers in a responsive, collaborative manner, leveraging the diverse capabilities of the branch in direct support of important research and technical services. This is the case even if the work must move from one part of the country to another to stay at the pace of innovation. With 13 shops spread across Canada, Design and Fabrication Services delivers design and fabrication services that meet demanding requirements for apparatus, fixturing, experiment setups and technical services for the NRC's contributions to academia, industry and major international partnerships.

Research Centre: Herzberg Astronomy and Astrophysics
Report a problem on this page