Analyzing and reducing the environmental risks of canister-type smoke grenades used by the Canadian Armed Forces is the focus of an innovative research collaboration between the National Research Council of Canada (NRC) and Defence Research Development Canada (DRDC). 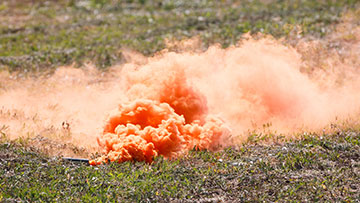 Passengers in a helicopter doing reconnaissance over an army training base may see clouds of yellow, red, purple or white smoke dotting the terrain. These could be large smoke grenades that armoured vehicles discharge to hide themselves from the aircraft—or flares ignited by soldiers to signal the helicopter.

While compounds in smoke grenades are known to infiltrate and interact with the environment, the extent of the risks have yet to be quantified. To that end, NRC Drs. Nancy Perreault from the Energy, Mining and Environment Research Centre and Fanny Monteil-Rivera, from the Aquatic and Crop Resource Development Research Centre are collaborating with Dr. Sylvie Brochu, Defence Scientist at DRDC's Valcartier Research Centre in Québec City. Their findings will help the Department of National Defence (DND) better understand the hazards of smoke generated by such grenades.

"In this 4-year project, we are collecting data to advise DND on the environmental risks of hand smoke-grenade training and, if necessary, propose ways to minimize the impact," says Dr. Brochu. "DND must ensure that its military ranges and training areas remain open to keep our armed forces prepared to defend Canadians' interests at home and abroad."

She points out that DRDC has been working with the NRC in this area since the 1990s, when they pioneered research into the effects of energetic materials such as explosives and propellants on the environment. Their findings led to the development of advanced munitions technologies with a reduced footprint that have had a positive impact on research and development in the international munitions community.

As new compounds emerge, the research has moved into the area of pyrotechnic materials that form smoke. Today, the team is conducting laboratory experiments to assess the environmental fate and ecotoxicity of coloured-smoke dyes and their travel patterns through the environment.

"Our multidisciplinary team has developed standard protocols for characterizing the environmental impact of any new compound developed by the military industry," says Dr. Perreault. For example, to investigate its effects, the NRC will mix a compound with native soil samples and conduct a series of tests. These include evaluating its migration potential through the ground, analyzing how it degrades in sunlight or by soil microorganisms, measuring its solubility, and determining its toxicity to terrestrial and aquatic receptors such as earthworms, plants or marine bacteria.

The NRC research team's expertise, which spans chemistry, analytical chemistry, microbiology, biochemistry and ecotoxicology, is essential to such a comprehensive assessment of impact and risks.

Dr. Brochu adds that the NRC's unique capability for gauging the eco-toxicity and interaction of compounds with soils has also led to specific tests geared to the Canadian climate. "The NRC scientists are an essential part of the equation," she says. "Without them, we would not be able to advise DND on the environmental risks of training with these munitions."

Over the years, the NRC-DRDC research collaboration has led to recognition that Canada's researchers are among the best in the world. Their studies have generated more than 100 open peer-reviewed papers and 500 presentations around the world. Their expertise was also critical in the development of a NATO reference document.

"Our research will lead to the development of technology that makes training and fighting less hazardous to the environment concludes Dr. Brochu. "This will help sustain military training and maintain troop readiness to defend Canada's interests."