Sniffer planes. Vomit comets. Fly-by-wire helicopters. Aircraft icing sensors. Experience simulators for passengers and crew. These are only a few tools that 75 years of dynamic brainpower at the National Research Council of Canada's (NRC) Flight Research Laboratory has produced. The lab's past and present contributions to aerospace are out of this world—and the runways for takeoff into the next era are clear.

A typical day at the Flight Research Laboratory could see trainee astronauts climb into a Falcon 20 microgravity airplane to adjust to zero-gravity conditions along a trajectory that induces nausea. It could see helicopter pilots testing the NRC's revolutionary fly-by-wire control system that simplifies their workload by replacing manual flight controls with an electronic interface. And on a cold winter's day, you might see a Convair 580 flying through clouds over the frigid Great Lakes, studying deadly aviation icing hazards with ultrasound sensors and radar. Now part of the NRC's Aerospace Research Centre, the Flight Research Laboratory was originally established at the Royal Canadian Air Force (RCAF) station in Arnprior, Ontario in 1946. At that time, research activities were under the direction of the NRC, while the RCAF provided flight, aircraft and maintenance personnel. The 2 organizations struck a partnership, with the Air Force supplying pilots and the NRC providing scientists. The Flight Research Laboratory also became the centre for civil aeronautical tests, working with manufacturers to research and develop new aircraft. The goal was to accommodate trained flight research personnel and equipment to conduct fundamental research without the interference of normal air traffic. Three wind tunnels provided exceptional facilities to study the performance of full-scale aircraft in flight.

In 1953, the lab moved to its current location next to the Ottawa Macdonald Cartier International Airport. Since then, the NRC has been investing steadily in facilities such as wind tunnels, electrodynamic shakers, engine-icing test centres and hyperspectral imaging systems. This support has helped the lab specialize in pushing airplanes to do what few have done before—and secure a highly respected position in global aviation research.

Flying high over the years

Spanning the last 75 years, the NRC's research into flight mechanics and avionics has led to countless successes in building better airplanes and improving flight safety.

One of the Flight Research Laboratory's major inventions almost 65 years ago was the precursor to the "black box." Still used today by the lab's Flight Recorder Playback Centre in accident and incident investigations for the Canadian military, the technology analyzes data and cockpit voice recorders to help improve aviation safety. 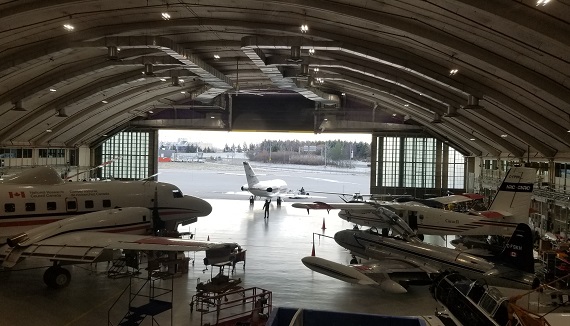 Canada's North is a good place to research snow and ice formations that threaten flight safety. One study at a former military base in North Bay, Ontario involved depositing different amounts of snow on the runways to measure factors such as friction, slush, snow and ice during takeoff and landing. "One of our pilots came up with a formula for much more accurate readings of these elements that significantly improved safety," says Per Talgoy, Manager, Quality Assurance at the NRC's Flight Research Laboratory. Now called the Canadian Runway Friction Index, the formula is used at airports across Canada to ensure aircraft can take off and land safely on runways covered in rain, ice or snow.

Beyond that, the Flight Research Laboratory has been adapting aircraft technology for a range of scientific studies. Since the 1990s, atmospheric science investigations have used remote sensing and in-situ techniques. The findings have helped researchers around the world understand weather phenomena and climate change, and apply the knowledge to increase safety. Among these was a series of international aircraft icing projects that led to innovative guidelines for flying into clouds—now reflected in the certification requirements for new aircraft. Collaborators in the studies included Environment and Climate Change Canada, Transport Canada, NASA, the Federal Aviation Administration, the European Space Agency and several universities.

Airborne platforms and sensors such as hyperspectral imagers have also proven useful in detecting and measuring biological, geological and geophysical phenomena on Earth. They can identify hot spots where forest fires could start, count wildlife and identify nitrogen deposition or carbon emissions. This technology also turns the NRC's vintage T-33 fighter jet into a "sniffer plane" that flies behind commercial airliners to measure pollution and greenhouse gas emissions. And it can gauge turbulence, which can give an airplane unexpected jolts that may injure passengers and flight crew members who aren't buckled in.

Malcolm Imray, Airworthiness Engineer, Aerospace Research Centre points out that the Flight Research Laboratory's achievements, in collaboration with organizations ranging from the Geological Survey of Canada to Defence Research and Development Canada, have dramatically advanced the state of the art in airborne geophysics surveying. "Canada became a leading nation in providing airborne magnetic surveying services, with participating companies becoming very successful in the process."

Before the Canadian Space Agency was launched in 1989, the NRC led space research and astronaut training using the T-33 with partners such as NASA among others. Today, the Flight Research Laboratory continues to support the Canadian Space Agency in space science and technology as well as the astronaut program, satellite development and robotics systems installed in the Canadarm. Research over the years has included qualification testing of spacecraft in simulated acoustics and vibration environments during launch. And conducting experiments in microgravity aircraft helps de-risk tools such as biological sampling equipment destined for the International Space Station.

Based at the Ottawa International Airport, the Flight Research Laboratory is also a "one-stop shop" for all things aerospace. The 3-building facility houses everything from a design office, composites shop and instrument lab to teams of airworthiness engineers, maintenance personnel, test pilots, flight test engineers and scientists.

The Flight Research Laboratory has been authorized by Transport Canada to modify aircraft extensively for research purposes. "Because our fleet is experimental and we have all the required expertise in house, we can quickly complete flight-test projects that clients and collaborators bring to us," says Imray. "We put our test crews into carefully instrumented aircraft and fly into conditions that commercial aircraft and crews would seldom experience."

Flight plan for the future

With the Government of Canada's Greening Government Strategy, which aims to achieve net-zero emissions by the year 2050, development and testing of alternative fuels and clean energy has become a priority for the NRC. To that end, the NRC Falcon 20 became the world's first civil jet to fly on 100% biofuel made from oilseed crops grown in Canada by Agrisoma. And most recently, the Flight Research and Gas Turbine Laboratories partnered with the NRC's Energy, Mining and Environment Research Centre, Design and Fabrication Services, Construction, and Automotive and Surface Transportation Research Centres to convert a Cessna 337 to hybrid electric power.

In addition to technical studies, the Flight Research Laboratory and its partners are continuously looking at ways to improve the health and safety of humans in flight. "We can measure and record objective data such as the body's response to helicopter vibration and noise environments," says Dr. Shelley Kelsey, Senior Research Officer and Acting Human Factors Group Leader. "Our findings have led to improved displays and symbology—including helmet-mounted displays—that enable pilots to fly safely in degraded visual conditions such as whiteouts."

Building on these successes, the recently opened Centre for Air Travel Research is the world's first facility designed to study and improve the end-to-end passenger experience of travelling by air, such as airport arrival, checking-in, baggage drop, security screening, boarding, flight, disembarking, document checks, baggage retrieval and departure from the terminal. Airlines and aircraft manufacturers can customize the facility to meet their needs and use the space to conduct research using passengers in a realistic environment. Bringing together multidisciplinary specialists—physiologists, psychologists, human-factor specialists and industry partners—the facility serves as an innovation platform that addresses the key questions: how do we make air travel more efficient, more comfortable, accessible and, now more than ever, healthier? The outcomes of this research with passengers will increasingly enable airlines, manufacturers and academia to develop and evaluate novel concepts in cost-effective ways.

To position Canada's aerospace industry for success in new markets, the NRC is investing in emerging technologies as well. These include digital twins, disruptive architectures and additive/subtractive manufacturing. One important area is autonomous systems such as drones and self-piloted helicopters. While these hold tremendous promise for societal improvements, they also raise new challenges that include sharing airspace with vehicles carrying people. For example, technology on crewed aircraft and helicopters must help pilots avoid collisions with drones.

Throughout its history, the Flight Research Laboratory's collaborations with aerospace research giants such as NASA, the German Aerospace Center and Japan Aerospace Exploration Agency have led to major and enduring contributions to flight research. "The lab has made unique and lasting contributions to aerospace and is well positioned to soar into the future," says Kirk Shaw, Director of Research and Development. "With our investments in scientists and engineers, advanced technologies and new aircraft, as well as stellar collaborations with industry, academia, other government departments and international R&D organizations, we'll continue to conquer uncharted horizons."