An astronomical century of discovery at the Dominion Astrophysical Observatory

On May 6, 1918, the "first light" fell onto photographic plates at the Plaskett Telescope, opening the Dominion Astrophysical Observatory and putting Canada onto the world stage of astrophysics.

The Plaskett Telescope was Canada's first major "big science" project to be funded publicly. For more than three decades, it enabled major discoveries in astronomy as one of the three largest telescopes in the world. In the decades that followed, the staff at the observatory have continued this legacy of scientific discovery and advanced engineering, working on some of the most powerful telescopes around the world, and advanced data management and analysis techniques, to broaden our understanding of the universe.

About the Dominion Astrophysical Observatory

When the Plaskett telescope was first built in 1918, it was home to two researchers, and one office building which was only built in 1922.

Today, the Dominion Astrophysical Observatory (DAO) is one of two national observatories managed by the Herzberg Astronomy and Astrophysics Research Centre, a part of the National Research Council of Canada. It is home to astronomers who lead scientific discovery, and engineers who develop advanced instrumentation for telescopes that peer further into the universe than ever before, making discovery possible. The Canadian Astronomy Data Centre, based at the DAO, provides data services that are used by 60% of astronomers around the world to allow them to carry out research.

The Research Centre manages Canada's participation in international observatories, opening the doors for Canadian astronomers and industry to work on some of the most ambitious projects in astronomy and the greatest puzzles about our universe. 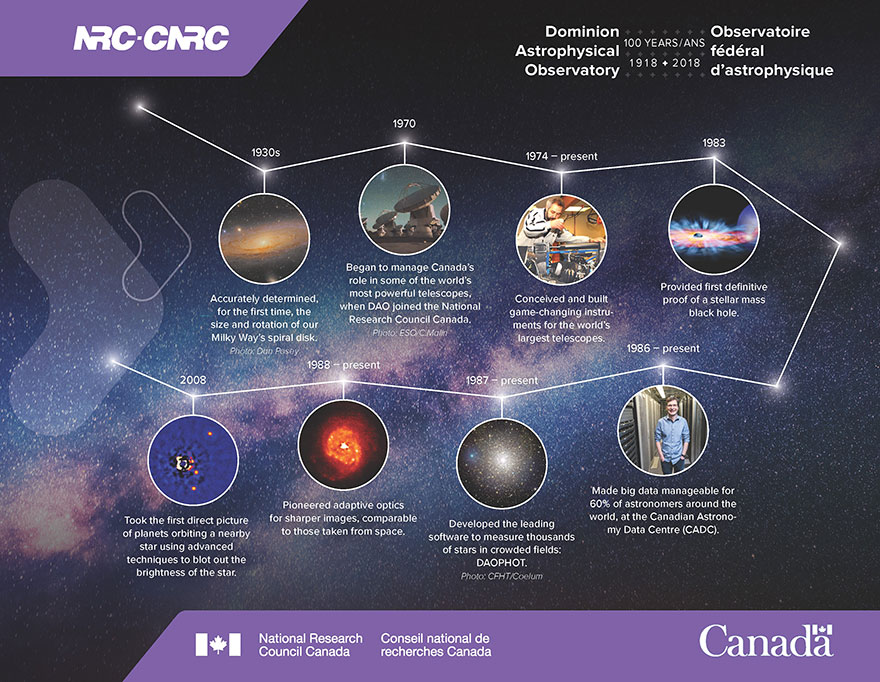