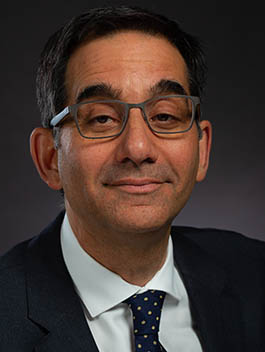 Dr. Robert DiRaddo is the Director General of the NRC's Medical Devices Research Centre. He is a research pioneer in industrial process modelling and interactive medical VR (virtual reality). Prior to taking on the DG role, his focus was on digital health care, the development of science-based interactive exercises for patients and digitally-augmented sensors for patient monitoring.

Dr. DiRaddo joined the NRC in 1991. He initially led the organization to international renowned leadership in process modelling research for plastics blow moulding and thermoforming. He then led cutting-edge research in physics-based simulation for surgical training, which went on to be commercialized by CAE Healthcare. Prior to working with the NRC, Dr. DiRaddo was employed in the plastics and chemical industry.

Dr. DiRaddo received his Ph.D. in Engineering from McGill University. He serves as an adjunct professor in the Faculty of Engineering at the University of British Columbia and the Faculty of Medicine at McGill University. Dr. DiRaddo is the recipient of numerous professional awards including the Government of Canada Public Service Award and 4 NRC Outstanding Achievement Awards. He has worked on hundreds of collaborative research projects with industry and academia and has coauthored upwards of 200 scientific manuscripts.