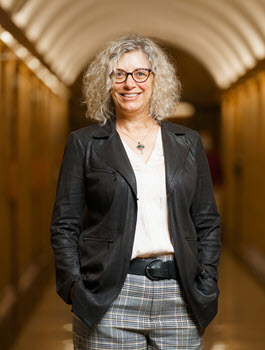 Dr. Julie Lefebvre joined the NRC as Director General of the Security and Disruptive Technologies Research Centre in August 2019.

Prior to joining the NRC, she worked for 20 years at Defence Research and Development Canada (DRDC), where she acquired considerable skills both as a researcher and as a science manager. Dr. Lefebvre started her career as a scientist in computer network operations and pursued it as the head of the network information operations. In 2012, she became the Director of Science and Technology Joint Force Development. In 2014, she was appointed Director General of the Science and Technology Joint Force and led 6 different programs in the fields of cyber operations, space operations and sensing technologies. She gained in-depth knowledge of federal scientific organizations through her experience at DRDC, which confirmed and nourished her passion to work towards the national interest.

As a distinguished scientist and an exceptional leader, Dr. Lefebvre has earned awards for creative management and exceptional leadership. In her managerial practice, she values equity, diversity and inclusion for all employees.

Dr. Lefebvre has a PhD in Theoretical Physics from McMaster University and completed a post-doctoral fellowship at Washington State University. She is also a graduate of the Canada School of Public Service's Executive Leadership Development Program.