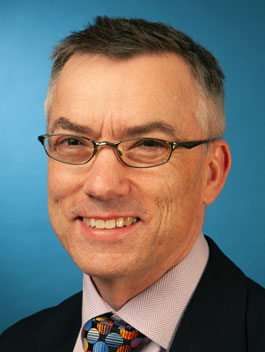 Dr. Alan Steele is Canada's Chief Metrologist and Director General of the NRC's Metrology Research Centre. In his previous role, he served as Director, Metrology at the NRC Institute for National Measurement Standards, where he oversaw research and measurement science activities for the Institute's physical and chemical metrology programs.

Dr. Steele holds a BSc in physics from the University of Toronto (1984) and a PhD in solid-state physics from Simon Fraser University (1988). He joined the NRC in 1991, following a Natural Sciences and Engineering Research Council of Canada post-doctoral fellowship at King's College, London, UK.

Dr. Steele is well known on the international scene for his work within the Sistema Interamericano de Metrologia; in the Joint Committee of the Regional Metrology Organizations; and as NRC representative to the Board of the National Conference of Standards Laboratories International. In 2008, he served as a Co-Director of the Bureau International des Poids et Mesures (BIPM) Summer School, and he was Chair of the BIPM Workshop on Metrology at the Nanoscale in 2011.